For me the fascination with the weird and the uncanny was there from the start: on a family holiday to Wales, aged four, asking the tour guide in Caernarfon Castle whether we might see the place’s spectral lady; a few years later, obsessing over Borley Rectory – the ‘most haunted house in the world’ – or, at the Halloween party I begged my mother to let me have (long before such events were a commonplace British occurrence), my friends and I dressed as Dracula, the Wolf Man and various grinning ghouls. My favourites back then, which called out to me from my spine-creased Usborne Guide to the Supernatural World, were vampires and lycanthropes; the popular late 1970s children’s book even showed a “typical magical werewolf ritual” which involved rubbing a transformative ointment of wolfsbane, opium, bat blood and the blood of a murdered child into your chest at, of course, midnight.

I was hooked; I was definitely for the dark.

As I grew older that lurid childhood book was superseded by the black-and-white filmic horror of Lon Chaney Jr. in the purportedly Welsh-set The Wolf Man (sneakily recorded off late-night telly), before aged around ten I managed to persuade my older cousin to hire me a copy of An American Werewolf in London from the local video shop; I doubt I appreciated its inherent humour, but was hypnotised and terrified in equal measure by its Nazi zombies and jaw-stretching transformations from man to beast. A few years later, now a teenager, for a while I decided I’d outgrown such imaginary scares – perhaps there was enough real horror in my mum’s repeated trips to the hospital for chemo and radiotherapy? The countryside and its wildlife, particularly birds, offered a new obsession to pursue, though what M. R. James might refer to as those “pleasing terrors” never went too far away. 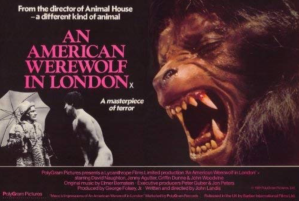 I grew to love moors and mountains, a landscape so different to my own south Lincolnshire flatlands, and loved the stories and folklore that seemed to cling like mist to the hills we visited on childhood holidays to Dartmoor and the Lake District. An early holiday to Wales had taken in the haunting Gelert’s Grave, traumatising me with its folk tale of a wrongfully killed, faithful wolf-slaying hound. Later, I fixated on stories of Britain’s actual lupine past, but it wasn’t until I was eighteen that I first came to the Scottish Highlands, their reputed last redoubt. That strange imaginative hold of the wolf over our collective consciousness has been an enduring one, reflected in the wealth of falsehoods that persisted long after the species had been hunted and hounded to the dark edges of the British map.

A wolf on the prowl. Etching after P. Potter, 1659. Credit: Wellcome Collection

There seems little certainty about when wolves became extinct on our island, though Anglo-Saxon place names that refer to them are relatively commonplace, indicating the species was widespread (or at least recently had been) during that period; this is backed up by the considerable numbers of successfully hunted animals recorded as late as the second-half of the tenth century. The increasing penchant of the monarch and the ruling class for the pursuit of deer – and the creation of royal forests and enclosed parks – led to an escalation of anti-wolf efforts after the arrival of the Normans. In 1281 Edward I commissioned Peter Corbet, a Shropshire knight, to bring out about their final extermination from England – a feat he is said to achieved nine years later; by this point wolves had likely long-vanished from Wales. Canis lupus lingered on north of Hadrian’s Wall, with a 1427 law passed during the reign of James I of Scotland making wolf-killing a compulsory activity. This did not lead to a nine-year removal like the purported extirpation south of the border, as Mary, Queen of Scots was still enjoying the hunting of wolves in the Forest of Atholl during 1563. However, the intensive woodland exploitation of the period would have meant that any remnant populations clinging to Caledonian survival must surely have been approaching their end by the time of Mary’s own execution in 1587.

Like the story of the legendary Gelert, a number of tales of dubious provenance were gathered during the nineteenth century surrounding the fate of the supposed sole remaining Scottish wolf, all of which possess an unreliable pedigree (the nature writer Jim Crumley catalogues these stories in The Last Wolf). Just off the A9 in Perthshire, outside the town of Pitlochry, is the Pass of Killiecrankie, a narrow gorge enfolded in mixed woodland where, in 1689, a decisive battle occurred during the Jacobite Rebellion; nine years before, in 1680, Sir Ewen Cameron of Lochiel (who would go on to be a commander on the battle’s winning Jacobite side) was said to have shot what, at the time, was considered the last wolf to be killed in Scotland. On the early Spring day on which I stopped off at the Pass while researching Ghostland it was hard to imagine any such creature lingering for long among the steep-sided slopes: the airy green woods were far removed from the bleak wilderness vistas in which my imagination had come to place the species.

One-hundred-and-fifty miles to the north along the same meandering A9 – at Helmsdale, halfway between Inverness and John O’Groats – stands a carved stone that marks the spot near which “the last wolf in Sutherland was killed by the hunter Polson, in or about the year 1700”. In fact, William Scrope’s Art of Deerstalking gives us the rather-less romantic account of the “feeble howling of the whelps” and subsequent killing of five or six wolf cubs, before the desperate, but ultimately futile intervention of their fearsome, full-grown mother.

No such monument exists near Strath Glass, northeast of Loch Ness, where in 1720 a woman supposedly defeated a wolf with an iron griddle pan, nor is there any commemorative marker along the lonely middle stretch of the River Findhorn, thirteen miles east of Inverness. Here, in 1743, a six-foot seven-inch giant of a man named MacQueen – who in my imagination appears like Christopher Lambert’s Connor MacLeod of the Clan MacLeod from the film Highlander – slayed, according to Victorian accounts composed a century later, a huge black beast: absolutely the last of its kind left in the land.

I retraced the mythic-seeming MacQueen’s steps on my trip north, putting up with the driving rain that soaked through my inadequate trousers for a glimpse of the landscape in which the fabled carnivore lived out its final days. The Findhorn curved below me like a scythe, the winter-bleached grass on the hillsides punctuated by ribbons of brown heather and the occasional leafless birch. A blackened, freshly charred area of burnt-off moor filled the air with a distinctive aroma not dissimilar to that of cooking sugar beet – a smell familiar from my Fenland youth and the four giant silos of the steam-emitting factory that rose over my hometown until their demolition in 1996. Though big-skied and vast, the lonely country all about me was managed and tamed, I realised, with the distant house perched on the bluff above the bend in the river, close to where the infamous deed was said to have been done, now a base from where less-mythic modern-day MacQueens head out with their shotguns to pursue tame, farm-reared pheasants and red-legged partridges, or flick their expensive fly rods to and fro for salmon.

The bend in the River Findhorn close to where the last wolf in Britain is said to have been slain. Copyright: Edward Parnell

As I descended to my car, tentatively crossing a shallow tributary by stepping on its slippery stones – for a second once again the excited little boy of those earlier upland holidays – three songbirds flew in front of me and perched low, half-obscured, in a birch: two taupe-coloured females and a coral-red male bullfinch that sat in silence while I watched them, before taking off in a flash of white and whispered whistles. Despite its long absence from the landscape the wolf will, I think, continue to persist as a powerful icon of our folk tales and supernatural fables, because it reminds us of the ultimate dominion of nature and time, of our fragility away from the safety of our ring-fenced human enclaves: we each know too well that there will be no hiding in our houses of straw – or even in slate-roofed, stone-walled cottages – once the Grim Reaper’s dry breath begins to blow our way.

(This is an adaptation of an article I wrote for a feature that appeared in The Scotsman on 31 October 2019.)